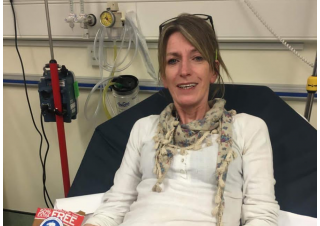 BBC, Kent Online and KMTV cover our case of Janice Johnston, Mum of 4, who was wrongly diagnosed with cancer

Janice Johnston, mum of 4, was told by the Kent and Canterbury Hospital (part of East Kent Hospitals University NHS Foundation Trust) that she had a rare form of blood cancer called polythycaemia rubra vera (PRV) in April 2017. In January 2019 she found out through Guy’s Hospital in London that she did not have cancer at all.

When Janice found out in April 2017 that she had cancer, she and her family were devastated. Janice was commenced on chemotherapy for approximately 18 months which caused her extreme side effects, including bone pain, epigastric tenderness, night sweats, nausea, significant weight loss of around 1.5 stone (from 8.5 to 7 stone), fatigue, dizziness, brain fogginess, blurry vision, general weakness, loose teeth and receding gums.

At the time she worked as an Auxiliary Nurse in a care home for St John Ambulance. However, as her immune system was compromised due to the chemotherapy, she was advised not to continue working in the care home as this would be too risky for her. Due to the risk and extreme side effects from the chemotherapy, Janice resigned.

It was only when Janice told her local doctors at the Kent and Canterbury Hospital that she felt the chemotherapy wasn’t working and insisted that she wanted to try other treatment options, that she was referred to specialists at Guy’s Hospital. At Guy’s Hospital Janice was advised that she would need an ultrasound scan and bone marrow biopsy before a diagnosis of PRV could be made. She therefore had these further investigations which confirmed she did not have cancer.

Janice instructed Shantala Carr, solicitor and partner at Girlings Personal Injury Claims, in January 2019 to pursue a medical negligence claim. An opinion from an independent Consultant Haematologist was obtained who confirmed that a diagnosis of the cancer PRV should not be made without an ultrasound scan and bone marrow biopsy and that by doing so, the Trust was negligent. A Letter of Claim was sent to the Trust, which admitted liability in January 2020. The claim was valued and after negotiations settled for £75,950.

“This is a case where straight forward investigations, which were not carried out, could have avoided the immense physical and emotional suffering that Janice went through and continues to go through. Not only did she have to deal with the emotional anguish of thinking she had cancer but she had to give her husband and four children the devastating news. She then suffered terrible side effects for nearly two years and lost her job as a result. Although she now knows she doesn’t have cancer, she is still recovering physically and emotionally. Failings like this that can impact someone’s life in such a drastic way are simply not acceptable.”

“When I was told I had cancer, my family and I went into shock. I was told that I was at high risk of suffering a heart attack, stroke or blood clot due to the cancer diagnosis and chemotherapy, which petrified me. I was too scared to be on my own and it was on my mind first thing in the morning and last thing at night. The chemotherapy made me feel absolutely awful. I was so poorly that I wasn’t living, I was just existing. I kept telling the hospital that I didn’t feel the chemo was helping but they just increased the dose each time. When I was finally told that I didn’t have cancer, rather than feel relieved, I felt stressed and incredibly angry. If only I had been given the bone marrow biopsy and ultrasound scan from the outset, all of this could have been avoided. I even featured in a newspaper article to try and raise awareness of this form of blood cancer. I now feel like a total fraud and am mortified that people might think that I made it all up.”

See below for links to the BBC, Kent Online, KMTV, Mail Online and Medscape: