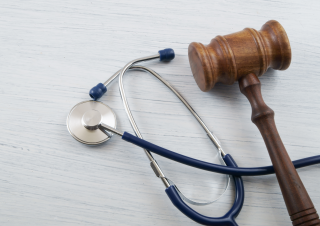 Mrs B attended her GP with a lesion on her leg which had been bothering her for some time.  The GP assumed it was a simple cyst that he could remove as a minor procedure.

Unfortunately, after the operation, Mrs B suffered with a complete foot drop.  She was unable to lift the front of her foot, causing her toes to drag along the ground as she walked.

Mrs B was referred for specialist investigations and it was discovered that the GP had severed the common peroneal nerve. This was the cause of the foot drop.

To make matters worse for Mrs B, not only did she suffer with foot drop, she also developed constant unrelenting neuropathic pain in her leg and foot which was sufficiently severe to wake her from her sleep.  She also developed depression because of her disability.

Mrs B underwent two further operations with specialist surgeons, hoping to restore her foot in an upright position. Unfortunately, these operations were unsuccessful.  She was also prescribed a course of antidepressants. These helped, but there were still times when her condition was difficult to manage.  Mrs B’s two children were very young at the time of the injury and she found herself unable to do many of the tasks and activities she did previously.

Mrs B instructed our Sue Man to investigate a claim on her behalf.  The advice from our medical experts was that the GP should not have attempted to surgically remove the lesion because it was positioned very close to the common peroneal nerve.  Appropriate management would have been to refer Mrs B to a dermatologist or a plastic surgeon for assessment.  Our medical experts also advised that there was a failure to obtain Mrs B’s informed consent for the procedure. The benefits and risks of the procedure were not explained and she was not given the choice of alternative treatment. Such alternative treatment should have included being referred to a specialist doctor.

Negligence was eventually admitted following a period of negotiation with the GP’s solicitors. Mrs B attended a settlement meeting, which was conducted by video link due to the Covid19 restrictions.

The claim was settled with sufficient compensation to allow Mrs B to purchase a new house that could be adapted to meet her needs, as well as pay for lifelong care and specialist equipment.